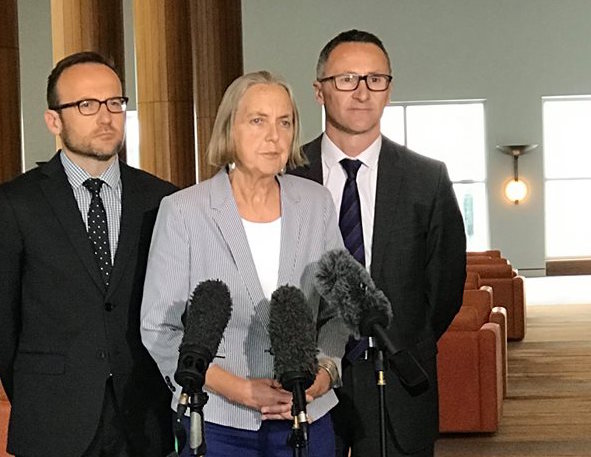 All Australian Members of Parliament are required to publicly declare their outside "interests" to try to limit actual or perceived conflicts of interests....

...[some] declarations provide an insight into personal passions.

This is certainly the case with two Australian Green senators:


Among other interests, parliamentarians are required to declare donations of more than $300 to any organisation over a single calendar year. In the past 12 months, Senators Rhiannon and Rice have declared five such donations to a range of groups and individuals that actively advocate for boycotts against Israel, refuse to acknowledge Palestinian aggression against Israelis and accuse Israel of "massacring" Palestinians.

Both senators have also travelled to Israel and the Palestinian territories in the past 12 months - although surprisingly neither declared it as sponsored travel.

In April 2017, Senator Rice was taken to the region by the Australian Palestine Advocacy Network (APAN). She told the Senate that she had spoken to "Israelis and Palestinians, people who were working to end the illegal military occupation of Palestine by Israel and remove the illegal Israeli settlements", including representatives from the New Israel Fund and B'Tselem.

...During her trip, Senator Rice also met with Issa Amro, the founder of Hebron-based Youth Against Settlements, and an activist who has been arrested by both Israel and the Palestinian Authority on incitement and other charges.

Since returning from that trip, Senator Rice declared two relevant donations: one to Hebron-based Youth Against Settlements and the other to her host, APAN.

In July last year, Senator Rhiannon visited Israel on a "self-funded fact-finding trip to Palestine" assisted by Union Aid Abroad-APHEDA and EuroPal. She too did not declare any sponsored travel, but she did deliver polemics to the Senate upon her return.

In the harshest - and most misleading - terms, she denounced Israel for committing "extreme crimes" in Gaza "regardless of the 2005 so-called withdrawal", for "crippling" the Palestinian economy and for the "destruction and desecration of sites holy to the Palestinians", among a litany of other accusations.

Senator Rhiannon - who has been Parliament's most dedicated Israel basher for the duration of her political career - declared three donations to Palestinian-related causes over the past 12 months.
In April, she made a donation to the Independent and Peaceful Australia Network (IPAN). While it may have an innocuous sounding name, IPAN counts among its members groups that actively support the flawed Boycotts, Divestment and Sanctions (BDS) campaign.

And recently, rather than condemning Hamas' incitement on the border of Gaza and Israel, IPAN promoted an event with the tagline "Australia has been doing arms deals with the Israeli government while the Palestinians are attacked".

In June 2017, she declared a donation to "Peter Manning for Palestine Project". It is unclear what exact project this donation was for. Manning is a former ABC journalist and now key Palestinian advocate. He is described as the chair of the BDS Forum, convenor of the Coalition for Justice and Peace in Palestine and a member of APAN.

In 2016, Senator Rhiannon gave a gushing review of Manning's "stunning" book called Janet Venn-Brown: A life in art". The book centres on Janet Venn-Brown, the one-time fiancée of Wael Zuaiter, a Palestinian terrorist who was allegedly assassinated by the Mossad in Italy in 1972.

Posted by Steve Lieblich at 12:57 AM No comments:

University of Sydney academics back Hamas

From a statement by Eric Abetz, Senator for Tasmania, 13 April 2018:

The pledge signed by 37 University of Sydney Arts and Social Sciences academics to boycott Israel and Israeli universities in an effort to stand in solidarity with the Hamas-controlled Palestinian territory of Gaza is troubling.
The academics have signed the boycott pledge as a part of the long-running Boycotts, Divestments and Sanctions (BDS) movement that has seen anti-semitic violent protests in Australia.

“It is both disappointing and dangerously ignorant for academics to try and dress up this endorsement of Hamas, a terrorist regime, as some progressive and forward thinking movement...” ...

“The Hamas-controlled Gaza Strip has seen Palestinians live in squalor with aid funds spent on funding terrorism and creating rockets to fire at innocent Israelis.”“Why these University of Sydney academics aren’t signing petitions against international aid being misspent on the promotion violence and terrorism against innocent Israelis is baffling.”“The fact that Hamas has incited violence and placed innocent Palestinians in harm’s way in order to make a political point is disgusting and should not be supported. I am hopeful these academics will reconsider their position,” Senator Abetz said.

Posted by Steve Lieblich at 8:52 PM No comments:

Australia should fund Palestinian welfare, but not “pay to slay”

From an essay by Sharyn Mittelman, Senior Policy Adviser at the Australia/Israel & Jewish Affairs Council:

(An edited version was published in the Daily Telegraph, 2 April 2018).

A key obstacle to peace between Israelis and Palestinians is the institutionalised incitement to anti-Israel violence by the Palestinian Authority (PA). Such incitement includes the naming of public streets and buildings after terrorists and encouraging “martyrdom” throughout the media, even in children’s television programs. 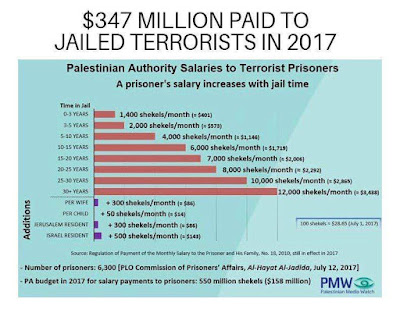 Pay to Slay ; the more Jews you kill, the more money you'll be paid

Perhaps the worst aspect of this incitement, however, is the PA’s “martyr” compensation scheme, which incentivises terrorism by providing lifetime monthly stipends to convicted terrorists relative to their sentences and to the families of slain terrorists. The worse  the crime you commit, the more money you receive. The PA recently announced that its budget for 2018 will include US$403 million for such payments.

The United States Congress has now decided to act against this nefarious scheme. The Taylor Force Act, officially passed on March 23, requires that the US halt its funding to the PA if the latter refuses to end its “martyr” compensation program.

The legislation is named after an American citizen and US army veteran Taylor Force who was killed in a stabbing attack by a Palestinian terrorist in Jaffa, Israel  in 2016 which also injured eleven people. Given that the terrorist who killed Force died while committing an act of terror, his relatives are paid a monthly stipend by the PA’s Martyr’s Fund.

The White House said in a statement that it “commends the Congress for including the Taylor Force Act, which prohibits most US foreign assistance that directly benefits the Palestinian Authority (PA) until the PA ends the abhorrent practice of providing payments to terrorists and their families in reward for acts of violence.”

The legislation has achieved bipartisan support.  Democratic New York Senator Chuck Schumer, the Senate minority leader, said that the “passage of the Taylor Force Act will serve as a shot across the bow to President Abbas, as he must be held accountable for the Palestinian Authority’s record of incitement and subsidizing of terror. It is my hope that by enacting this bill we can put an end to the Palestinian Authority’s disturbing practice, all while honoring the memory and sacrifice of Taylor Force.”

The legislation includes exemptions for PA projects that will continue to receive US funding including hospitals in east Jerusalem, wastewater programs and child vaccination initiatives.  Moreover, the US will continue to provide funding for the PA’s security and intelligence forces, which have cooperated with Israel in thwarting terror attacks.

PA President Mahmoud Abbas disappointingly condemned the Bill and vowed to continue to pay the families of “martyrs and prisoners.”

The Palestinian Liberation Organisation (PLO) envoy to Washington, Husam Zomlot, also criticised the legislation as politically motivated, and ironically said that the Bill  “punishes” the PA, “which is the only agency committed to peace and nonviolence, and undermines the American-Palestinian bilateral relationship and decades of US investments in the two-state solution.”

Zomlot’s statement demonstrates the hypocrisy and double-dealing of the PA.  It cannot claim that it is committed to “non-violence” while it is encouraging its people to become terrorists by providing financial incentives.  If it truly wants to be considered as committed to non-violence, then it should eliminate its institutionalised incitement.

The Australian government should now consider the relevance of the Taylor Force Act to Australian funding to the PA.  In January last year, Tony Abbott called for Australia to cut our $40 million annual aid budget to the PA while it “keeps paying pensions to terrorists and their families”.

In response, Foreign Minister Julie Bishop said Australia’s aid to the Palestinians has "robust risk management and due diligence assessment processes" that also apply to partner agencies and governments. In addition, Bishop said the government had a "zero tolerance policy" for fraud and corruption, referring to the suspension and review of funding following 2016 allegations that a World Vision employee was redirecting funds to Hamas.

Moreover, according to the Department of Foreign Affairs website, the Australian government does have a plan to “reduce the proportion of program resources that flow to the PA and increase the proportion that goes directly to promote economic growth in the agriculture sector.”

It is true that we can follow the money we provide the PA to ensure it doesn’t go directly to funding terrorism, but our funds still free up other money the PA can then use for its terror incentive scheme.

However, the passage of the Taylor Force Act sends a strong message to the PA that it can no longer have it both ways - it cannot pretend to be a partner for peace in English, and call for martyrs in Arabic, and then pay terrorists and their families.
This message to the PA will be even stronger if it is supported by other principled actors in the international community, such as Australia.

Posted by Steve Lieblich at 10:55 PM No comments: