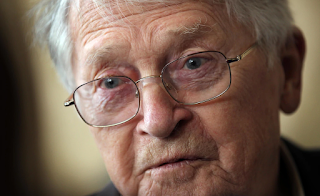 Hungarian-born Karoly (Charles) Zentai, is accused of detaining and beating to death Peter Balasz, an 18-year-old Jewish youth, and throwing his body in the Danube River in Nazi-occupied Budapest in November 1944.
In 2012, Australia’s High Court ruled that the Australian government could not order Zentai's extradition to Hungary to face a criminal trial, because the offence of "war crime" did not exist under Hungary's laws in 1944. The decision was widely criticized as a triumph of narrow legalism over substantive justice. Dissenting judge Dyson Heydon said that the Court’s decision was an "extremely technical one", given that Zentai was wanted for "beating a Jew to death in Budapest in 1944".
A 2006 US-government commissioned report accused Australia of having "an ambivalent" attitude to hunting Nazi war criminals , and a "lack of the requisite political will". The Zentai case confirms this assessment. Zentai died in Western Australia on 13 December 2017, without ever facing trial.
No accused Nazi war criminal has ever been punished in Australia. The US, Canada and the UK all have a far better record than Australia in bringing war criminals to justice, extraditing them and stripping them of citizenship.
Over the years Australia has accepted as citizens accused war criminals not only from World War II but also from the former Yugoslavia, Rwanda, Afghanistan, Indonesia and Cambodia. They blend in seamlessly with the rest of Australian society. Exploiting our tolerance and naivety, they walk freely among us and our children.
Forgiveness can be a powerful healing sentiment in the appropriate circumstances, but not when the wrongdoer seeks no forgiveness, shows no remorse and does everything possible to evade justice.
Posted by Steve Lieblich at 1:01 AM No comments: