If the Israelis are right, the Australian taxpayer has been one of the biggest (unwitting) funders of the terror group Hamas in Gaza. The claim is that money given to World Vision for farms and other economic projects has been diverted to build a military base, tunnels and weapons for Hamas. The head of World Vision Gaza, Mohammad El Halabi, stands accused of funnelling $US43 million ($57.4m) to Hamas since infiltrating the charity in 2010. These are serious allegations. Australia gives aid money to the Palestinian Authority to encourage the economic development without which a two-state solution cannot be viable. It is a destructive fraud if those funds are used to bankroll terror.

There is much at stake. Through AusAID and the Department of Foreign Affairs and Trade, the Australian government has been the world’s single biggest donor to World Vision in Jerusalem, the West Bank and Gaza, as we reported yesterday.

Tim Costello, chief executive of World Vision in August when charges were brought against Mr Halabi, stressed the agency’s work in Gaza was subject to “regular internal and independent audits”. This week, a spokeswoman for World Vision said it had “yet to see any substantive evidence to support the charges made by the Israeli authorities”. There is no suggestion that the World Vision hierarchy was aware of the alleged fraud. Even so, it was the correct step to suspend World Vision’s operations in Gaza and to put a freeze on funding from DFAT. The Israelis can answer for the integrity of their justice system but Australia must ensure that the DFAT review of Gaza funding is thorough and its results open to public scrutiny. The Australian allegations have a larger context. In June this year, a former British cabinet minister, Eric Pickles, complained that British financial assistance to the PA was being used to free up money to pay prisoners convicted of violent crime in the conflict with Israel. Last month, Britain suspended millions of pounds in financial aid to the PA pending an investigation into claims that money was ending up in the hands of terrorists.

The PA has received an estimated $US25 billion in financial aid from the US and other countries during the past two decades, according to Khaled Abu Toameh, a journalist writing for the Gatestone Institute. He argues that the failure of the US and Europe to hold Yasser Arafat accountable for this money encouraged the corruption that pushed Palestinians into the arms of Hamas. “Unless Western donors bang on the table and demand that the Palestinian Authority use their money to bring democracy to its people and prepare them for peace, the prospects of reviving any peace process in the Middle East will remain zero,” Abu Toameh says.

Israel’s Deputy Foreign Minister Tzipi Hotovely cites a 2015 report to the effect that per capita the PA receives the highest amount of foreign aid in the world. She says the PA budget for giving monthly stipends to terrorists and their families is roughly $US75m, representing 16 per cent of the annual foreign aid received. Rather than dedicate financial assistance to peaceful economic development, the PA prefers to spend it on terrorists, cross-border tunnels, and missiles to fire on Israel.

All this suggests that Australia should seize the opportunity provided by the World Vision affair to revisit the rationale of our payments to the PA, and be prepared to stop them altogether if the Palestinians cannot satisfy the most stringent conditions.

Posted by Steve Lieblich at 10:12 PM No comments:

Trump takes stock of the world

... Donald Trump ....is so far showing a level of finesse that seemed unlikely during the election campaign. His early prioritising of Israel and the Middle East — woefully neglected by Barack Obama for so long — is a case in point.

The protracted civil war in Syria, with its dire consequences for the growth of jihad terrorism and the opportunity it has handed Russia to gain regional strategic ascendancy, owes much to Mr Obama’s lackadaisical attitude and his unwillingness to assert US power.

On the negative side, the last rites of the US-led Trans-Pacific Partnership have been announced. Asian leaders saw the pact as a vital sign of Washington’s commitment to the region. Its collapse, unfortunately, opens up new opportunities for China to expand its influence. Beijing, along with Australia, is a member of the alternative, 16-nation Regional Comprehensive Economic Partnership.

At least Mr Trump has moved quickly to reassure regional nations, including South Korea, of continued backing. The first foreign leader he will meet will be Japanese prime minister Shinzo Abe. It is also good that two Trump advisers have set out the president-elect’s “Peace Through Strength Vision for the Asia-Pacific”, borrowed from Ronald Reagan’s Cold War mantra.

The world will be watching his moves in Europe closely, after he cast protocol aside to welcome Britain’s UKIP Brexit leader Nigel Farage to Trump Towers....
Posted by Steve Lieblich at 1:53 PM No comments: 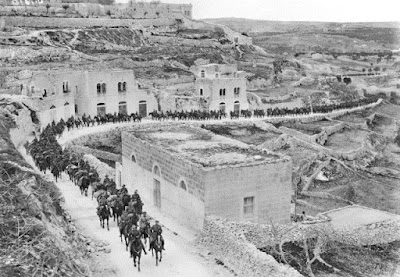 In conjunction with the Begin-Sadat Center of Strategic Studies [BESA], the Australian Strategic Policy Institute [ASPI] has released a new report,


The Wattle and the Olive: A new chapter in Australia and Israel working together.

The cover photo of the report (and above) by official Australian war photographer in both world wars, Frank Hurley, was carefully chosen: it’s an iconic picture of an Australian Light Horse regiment marching up to the old city of Jerusalem, in the wake of the surrender of the Ottoman forces in December 1917.

The study looks at what strategic interests Australia and Israel have in common and what each side can bring to the relationship across traditional and non-traditional security realms. It examines the strategic rationale for a stronger working relationship, rather than just relying on the common values both states share.

There’s really no country in Middle East whose interests are more closely aligned to Australia than Israel. In particular it’s a bulwark against violent extremism in the region. Unfortunately in Australia there’s a tendency to see Israel purely through the lens of Palestinian issue and the peace process. The ASPI-BESA study wanted to get away from that prism.

The report highlights areas cooperation where interests are aligned, like countering terrorism and counter proliferation. Cyber security is another obvious area. Israel is very advanced in cyber deterrence. It’s probably subject to more cyberattacks than any other country.

The report’s key message is that Australia and Israel can cooperate in strategic affairs to the benefit of both countries. Israel should be seen as strong middle income country: it qualified to join the OECD, the top industrial countries group, six years ago, so the idea of ‘tiny’ Israel is rather out of date.

In traditional security, there’s been almost no high-level military exchanges between the two countries. Israel doesn’t have a uniformed military attaché in Canberra (although it’s posted a Ministry of Defense civilian). The Australian military attaché to Israel is based in Ankara, Turkey.

Both the ADF and the Israel Defense Forces would benefit from enhanced cooperation: both operate American equipment and both states’ militaries have invested heavily in world-class technology.

Israel has proven to be a prime source of effective counterterrorism and counterinsurgency tactics, techniques and procedures. On Australia’s side, there’s been unprecedented growth in its special forces’ capability. Israel, whose military doctrine is based on self-reliance, can learn from Australia’s experience in operating as part of military coalitions.

Israel has experience in urban warfare and the development of unmanned aerial systems for intelligence, surveillance, reconnaissance and combat. It has expertise in countering improvised explosive devices, an area where Australia also has considerable expertise, and is a global pacesetter in active measures for armoured vehicle protection, defence against short-range rocket threats, and the techniques and procedures of robotics. Israel has also developed a range of capabilities for battlefield intelligence, surveillance and reconnaissance and advanced munitions.

Both countries’ militaries are focused on how to incorporate cyber capabilities into their military operations. Both countries are near to major choke-points along maritime oil and trade routes, making naval affairs an important component in their national strategies. In air power, both countries intend to acquire the F-35A variant of the Joint Strike Fighter. As two operators of the same variant, there might be potential for collaboration: in the technical domain, that’s most likely to occur in the broader community of international operators of the F-35A.

The RAAF is developing its expertise in the use of unmanned aerial systems. There’s much Australia can learn from Israel’s pioneering extensive development and operational deployment of unmanned aerial vehicles. Starting in 2017, Israel and Australia should look to develop a strategic dialogue involving senior uniformed and civilian defence personnel. The dialogue should look at strategic thinking, military-to-military cooperation, US alliance issues, cybersecurity and defence industry cooperation.

In the area of soft security, societal resilience is an obvious area for information sharing: Israel has been hit with terror and rockets while still preserving social capital. As a country that’s endured decades of conflict and terror, yet still managed to build a flourishing economy and vibrant democracy, Israel offers insights into individual and societal resilience.

Water management is another area where we can share expertise. Israel is a world leader in dryland farming, drip irrigation and waste water recycling. This is an obvious area for cooperation in international development programs in the Asia–Pacific and Africa, one that will support Australian foreign policy objectives.

We can transform our longstanding friendship by opening a new chapter in our relations through deepening existing areas of cooperation and catalysing new ones, such as defence cooperation.
Our two countries will need to be as bold as the 4th Light Horse Brigade at Be’er Sheva if we’re to succeed in forging a new strategic partnership.
Posted by Steve Lieblich at 2:31 AM No comments: