Michael Keenan, Australia’s Minister for Justice and Minister Assisting the Prime Minister for Counter Terrorism has told a meeting in Berlin that “newer and subtler forms of anti-Semitism can still be found”. 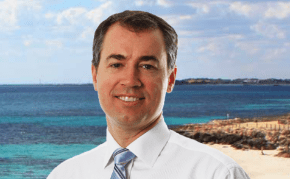 Keenan was speaking at the Inter-Parliamentary Coalition for Combatting Anti-Semitism Conference in Berlin.

In his address the Minister said that Australia has a long and proud history of racial, cultural, religious and ethnic diversity.

He said: “With one in four Australians being born overseas, our nation has one of the most culturally and linguistically diverse populations in the world.

But we still need to be vigilant to the emergence of ideologies or ideas that seek to divide us along the lines of race or other differences.

Anti-Semitism is far from being a new concept. It has a long and particularly dark history. It is a worldview that should have died and been consigned to history long ago but its resilience should continue to trouble us all.

We should also be mindful that anti-Semitism evolves. In the west you may no longer find many who would assert that Jewish people are racially inferior, and mainstream society overwhelmingly rejects outlandish conspiracy theories – but newer and subtler forms of anti-Semitism can still be found.

The extravagant attention given to the alleged human rights abuses in Israel while similar atrocities in other countries remain unheard of should ring alarm bells.

All countries here today are working to tackle this important issue and Australia is no exception.
Australia has a unique history, beginning with our native Indigenous population, British settlement and extensive immigration from a range of countries and cultures, many of which are represented here today.

Jewish people in particular have been a key part of Australia’s story as a nation since the days of European settlement. While the Jewish community in Australia is relatively small today, we find the Jewish people in roles of leadership, at the top of every walk of life.

While Australia does not face the same level of anti-Semitism as across many parts of the world, we share your concerns around racial hatred and hate speech.

The interconnectedness of our world means we are all touched by the effects of rising anti-Semitism and related movements of racial and religious hatred.

For example, migration flows across Europe are of huge concern for many of you here. We know that the public’s tolerance for cultural diversity improves when they are secure in the knowledge that borders are being managed appropriately.

Social media and technology can bring us together. Equally, it is making it far easier to spread messages of hate and totalitarian, violent ideology.

As my fellow panel members have noted – combatting anti‑Semitism through effective legislative responses is of course a crucial role of Government in ensuring the protection and safety of its citizens.

Consistent with the London Declaration of this Coalition, the Australian Government has reaffirmed its commitment to the Genocide Convention.

In November 2015 the Australian Government introduced legislation into the Australian Parliament to criminalise the act of ‘advocating genocide’ to further strengthen Australia’s legal response to the ongoing threats in the community.

The offence will criminalise advocacy — that is, counselling, promoting, encouraging or urging — of genocide of national, ethnic, racial or religious groups in Australia.

The Australian Government firmly believes that the preaching of genocide is never the same as an expression of a radical political opinion. These laws mark the acceptable boundaries between free speech and preventing and disrupting intolerable and extreme hate speech.

Australia has also criminalised urging violence against individuals of groups on the basis of race, religion, national or ethnic origin.

Legislation is necessary, but it is just one part of the solution.

That is why the real change, the harder change, in tackling hate speech starts with relationships – we need what some commentators have called the ‘right mental infrastructure’.

Dr Michael Fullilove, an Australian political commentator at our Lowy Institute, has written that ‘reconciliation needs to get personal. It needs to be flesh and blood…it will be achieved at pubs, and clubs and football grounds as much as in debating chambers and at conventions.’

The Australian Government has committed $21.7 million over four years to combat hate speech, among other counter-terrorism measures, to limit the impact of extremist narratives on domestic audiences.

The Government is working with the Australian Human Rights Commission to support the National Anti‑Racism Partnership Strategy and its related public awareness campaign, Racism. It Stops With Me.

The Strategy and Campaign draws on the existing expertise on anti‑racism and multicultural matters across government and non‑government representatives. The high profile media campaign has successfully raised community awareness that all forms of racism are unacceptable in the Australian community.

More than 360 organisations across Australia have signed up to support and promote the Campaign to date.

The Australian Government has also established the Australian Multicultural Council to advise Ministers. The Council’s advice focuses on building stronger and more cohesive communities and promoting stronger intercultural and interfaith understanding. This advice assists government’s policies to harness the economic and social benefits of Australia’s culturally diverse population.
Legal responses are necessary but are just one part of the solution to tackle anti-Semitism and other forms of hate speech and intolerance.

Political leadership is crucial in setting the tone for the debate. Governments need to show leadership by promoting a narrative of commitment to shared democratic societal values. Equally, we must show respect for cultural diversity, to combat and prevent racial and religious hatred.”
Posted by Steve Lieblich at 3:33 AM