Australia's Foreign Minister has slammed the recent UNESCO decision entitled "Occupied Palestine" in a letter to the Exceutive Council of Australian Jewry. 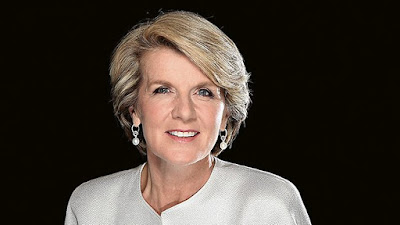 Minister Julie Bishop wrote that she was "dismayed and disappointed that this draft decision was adopted by the UNESCO Executive Board... The text is highly politicised, unbalanced and provocative, and reflects poorly on UNESCO...." 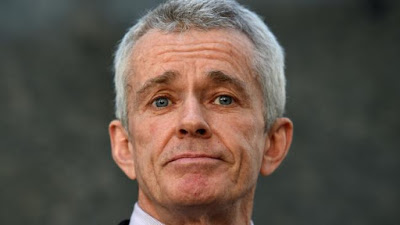 One Nation senator Malcolm Roberts has rejected calls from Jewish leaders that he repudiate the work of an anti-­Semitic ­author he has cited to support his claim that a “cabal” of inter­national bankers is trying to ­create a socialist global government.
The B’nai B’rith Anti-Defamation Commission and the Australia/Israel And Jewish ­Affairs Council have demanded Senator Roberts dissociate himself from the writings of ­Eustace Mullins, an American anti-Semite who claimed that inter­national banks and the US Federal Reserve were part of a Jewish conspiracy to introduce global socialism.
Senator Roberts has cited Mullins’s 1952 book The Secrets Of The Federal Reserve as a primary source for his claim that international banks are part of a “tight-knit secret group” using climate change to usher in a new world order. The senator wrote widely on the issue in his previous role as project ­director of the climate-sceptic group The Galileo Movement.
Senator Roberts ... said: “I object completely to the stupidity of trying to link me with anti-Semitism,’’ adding that he enjoyed close friendships with Jewish people and had a high regard for the Jewish community.
The chairman of B’nai B’rith, Dvir Abramovich, said he was disappointed that Senator Roberts was defending the work of Mullins, a virulent racist who had called Jews parasites, praised Hitler and described the Federal Reserve as “the high Jewish bank”.
Peter Wertheim, the executive director of the Executive Council of Australian Jewry, said ...Senator Roberts['] ... beliefs about banks contained echoes of Jewish conspiracy theories from a century ago.
Posted by Steve Lieblich at 8:15 PM No comments:

The leader of the Greens Senator Richard Di Natale has told the Australian senate his views of the political life of Shimon Peres, a former Israeli president who died recently at 93.

Di Natale said: “Leaving aside the astonishing hypocrisy of the coalition, who have consistently denied leave on foreign policy motions and yet seek to introduce one today, it is important to put on the record that Shimon Peres has been described as an architect of Israel’s nuclear weapons program, which to this day remains outside the scrutiny of the International Atomic Energy Agency; that he was the father of the settler movement, which involves the confiscation of large swathes of Palestinian land; and that in 1996 he oversaw Operation Grapes of Wrath, which involved the death of 154 civilians in Lebanon and involved the shelling of a United Nations compound, which killed 106 sheltering civilians. While he was awarded a Nobel peace prize in 1994, members of that committee have expressed regret that the prize could not be recalled on the basis of the actions that followed.” 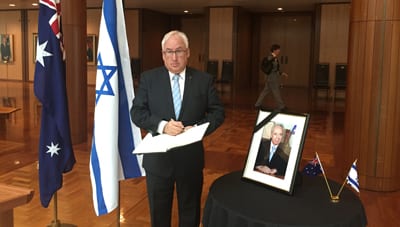 “It was unprecedented for the head of a political party to attack the recently deceased head of state who was known for values of peace and reconciliation with which the fake Green party ostensibly identifies.” Di Natale’s attack on Peres came after a non-partisan resolution in the senate lauding Peres’ lifetime achievements. The Green Party’s hypocrisy in criticizing Shimon Peres shows once again why any Australian Jewish citizen cannot support that extremist political party that singles out Israel for disdain. Not a word about Peres’ moves for reconciliation between Israelis and Palestinian, his support for a two state solution and his futuristic moves to engage Israel with the Arab world through technology and science were even noted by the deeply ignorant leader of the Australian Green Party that has long left environmentalism behind as its main concern and replaced it with extremist attacks on Israel and the West. Danby said “Di Natale attacked Peres’ role 50 years ago in Israel acquiring nuclear technology – a failsafe for the Jewish State given the near extermination of the Jewish people during the Shoah which was understood by most reasonable people.” In his Senate attack Di Natalie cited other partisans who said Peres’ noble peace prize should have been cancelled because of a military operation in Lebanon when he was leader just after Rabin’s murder.

Danby said, “None of the green party had made such violent denunciations over the hundreds of thousands of civilians murdered in Syria, again emphasising their blinded hypocrisy.” He continued, “This small rotten speech is an insight into the mentality of this group and shows yet again why it was so important to defeat them in Melbourne Ports and elsewhere at the recent election

Danby concluded: “Young people who have been attracted to the Green party’s faux environmentalism should see their environmental policies as merely a cover for a hateful attack on Israel’s widely mourned President. Although the Greens party may have begun with a strong environmental idealistic focus, this shameful speech shows once again that the Green party has today morphed into a party of far left extremists who are unfit for the support of those with any idealism.”

The Australia/Israel and Jewish Affairs Council executive director Dr Colin Rubenstein commented: “With his interjection during the condolence motion for Shimon Peres, Richard Di Natale has put his pathetic misunderstanding of world affairs on show and disgraced his office as leader of an Australian political party.

Di Natale showed his utter disregard for Israel’s need for security in a fraught environment and chose to completely ignore Shimon Peres’ many celebrated achievements as a peacemaker.

It says volumes about the schism between The Greens and decency that representatives of 70 nations attended Shimon Peres’ funeral and genuine political leaders lined up to praise him.”

The Executive Council of Australian Jewry president Robert Goot and executive director Peter Wertheim issued a joint statement saying: “The late Shimon Peres was a world-renowned statesman, as was attested to by the eloquent eulogies at his funeral by most of the world’s leading political figures, including Barack Obama and Bill Clinton.

Shimon Peres’s passing also created a rare moment of warmth and civility between the Israeli and Palestinian leaders, which is further testament to the greatness of Peres and his ability to unify, both in life and in death.

Unlike Palestinian leader, Mahmoud Abbas, who said Peres’s death is ‘a heavy loss for all humanity and for peace in the region’, Senator di Natale could find not a single positive thing to say on Peres’s passing. The Senator’s graceless criticisms  of Shimon Peres shortly after his passing reflect poorly on himself and the Australian Greens, and suggest that their leader is a political captive of the extremists in his party.”

Posted by Steve Lieblich at 7:07 PM No comments: