21 Feb 2017, by Steve Lieblich:
There are reports that the Australian Labor Party is moving towards a policy to recognise a new "Palestinian" Arab state somewhere near Israel.

How will it help ANYONE to "recognise" a fake national identity and create yet another failed, brutal Islamic terrorist entity? (Look at what happened in Gaza.)
In the 2000 years that Palestine was ruled by foreign empires, including the 400 years of Ottoman rule, there was never a Palestinian-Arab movement for self-determination. Even when Israel declared an independent Jewish state, opposition to it was seen as a pan-Arab movement, and the 1948-9 war was waged against Israel by the Arab League.
The PLO was first formed in the 1960s, at which time its manifesto explicitly renounced any ambitions to self-determination in Gaza and Judea/Samaria (the "West Bank"), which were then ruled by Egypt and Jordan. The only land they wanted to "liberate" was the land ruled by Jews (inside the 1948-9 Armistice Line).
Since 1967, the PLO manifesto was altered, and they now claim the additional land, which they previously renounced but is now controlled by Jews, as their "ancient homeland" ...
The entire narrative of Palestinian nationhood is a fiction, a tool to destroy Jewish self-determination, rather than an ambition for Palestinian-Arab self-determination. 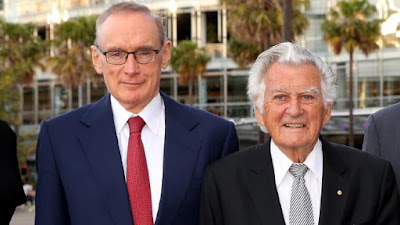 The former Labor foreign ministers and prime ministers, including Kevin Rudd, have advocated a change in foreign policy and recognition of a Palestinian state as Mr Netanyahu, the first sitting Israeli PM to visit Australia, prepares to meet with Malcolm Turnbull and Bill Shorten this week.

Mr Danby ... declared the men “never raise their heads to power” as he warned against “hyperventilating” over the Israeli-Palestinian conflict.


“I might say to all of the heroes who are beating up on a country, a democratic country ... why don’t they beat up on China when the Chinese president comes to Australia?”...

“Oppression of the Tibetans or the Uighurs is far worse than what’s happening to the Palestinians when some Israelis build houses 20 metres or 100 metres or a mile across the Green Line.

Posted by Steve Lieblich at 2:50 PM