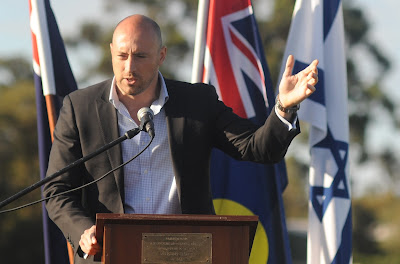 The resolution is as follows:

That the Swan Valley branch:


Condemns in the strongest possible terms the attacks on Israeli civilians carried out throughout Israel and the West Bank by Palestinian terrorists, frequently targeting children and the elderly, which have left dozens of Israelis dead or injured;
Deplores the acts of incitement by Palestinian clerics and political leaders which have precipitated the current violence, including inflammatory declarations by Palestinian Authority President Mahmoud Abbas, which appeal to racism and claim that “Jews have no right to desecrate the mosque with their dirty feet,” and calling upon the Palestinian people to “spill blood in Jerusalem”;
Rejects any attempts to draw a moral equivalence between Israeli victims of terror and Palestinian perpetrators whether in media reports or public statements by Australian political leaders;
Conveys condolences to the Government of Israel and its people, particularly to victims of terrorism and their loved ones;
Rejects claims that the ‘root cause’ of these attacks is Israel’s occupation of the West Bank and settlement construction, noting that the Arab rejection of peaceful co-existence with Jews pre-dates both the occupation and the commencement of settlement building in 1967, and even pre-dates the establishment of the modern State of Israel in 1948, noting for example the religiously motivated massacre of Jews by Palestinian Arabs in Hebron in 1929;
Affirms: the rights and duties of the Israeli authorities to take appropriate measures to defend and protect its population from terrorism


RECOMMENDATION: That the motion be referred to the Shadow Minister for Foreign Affairs
Posted by Steve Lieblich at 2:44 PM